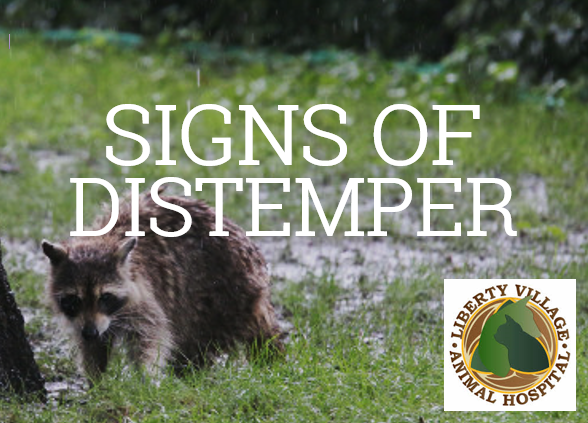 According to Toronto city officials, distemper in raccoons and skunks is currently a bigger problem than rabies in the GTA. The problem is that while most of us have heard of distemper, we actually don’t know how to recognize it, so in many cases, reports of ‘rabid’ animals are in fact animals with canine distemper.

Canine distemper is a virus that affects an animal’s gastrointestinal, respiratory and central nervous systems, as well as the conjunctival membranes of the eye. It can take a few days from the first infection to the first symptoms, but in almost all cases the disease is fatal, and even the minority of dogs who do survive end up with permanent brain damage.  Your vet will normally include distemper vaccinations as part of their normal vaccination schedule in your puppy’s first year – and it’s important.

It’s rare for an animal with distemper to bite a human, and even if it did, canine distemper is not a threat to humans. It is, however, very dangerous to dogs. (Feline distemper is caused by a different virus, and while cats may catch this from a wild animal, it’s not transmitted between dogs and cats.) What’s more, canine distemper is highly contagious. Even getting within a few feet of a raccoon with distemper who then sneezes, or ‘snoofling’ with a wet nose in the path of a sick skunk who passed by hours before, can infect an unvaccinated dog.

Here’s a skunk with mid-stage distemper, recently spotted in Etobicoke:

Here’s a raccoon in the early stages of distemper:

What should you do if you see an animal acting strangely?

Of course it goes without saying that you shouldn’t approach the animal or try to trap it.

In the GTA, you should call 311 and report it. You may be surprised at just how quickly they are able to mobilize animal control, especially if the animal is in a park or schoolyard. Keep children and pets away from the animal if possible.

And if you’re a dog owner, please do check with your vet and make sure your dog has been vaccinated!